Reaching Within and Healing Through Expression: A Conversation with Pierce Freelon 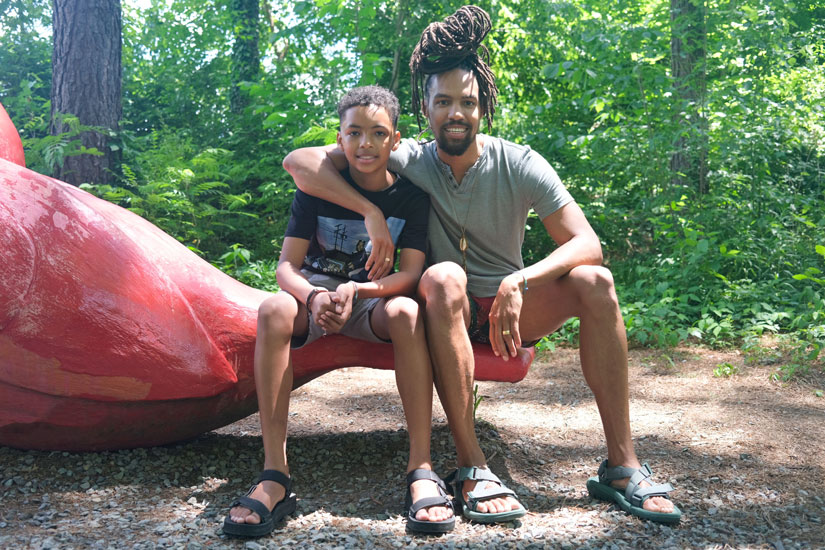 Pierce Freelon is many things but the word I would use to best describe him is grounded. He inherently knows who he is and his life’s purpose.

For over a decade, Pierce has traveled the world teaching hip-hop and music production to youth in community centers. He is also the co-founder of Beat Making Lab, an Emmy award-winning PBS web series, and the founder of Blackspace, a creative space that facilitates youth mentorship and digital storytelling through music and film. Music is the medium he uses to spread love, joy, and to heal the community that raised him.

As a son, father, husband, and community leader, Pierce is an integral thread in Durham, North Carolina. To celebrate Black fatherhood and the power of healing through expression, I spoke with Pierce about his journey and the lessons he has learned from his father.

RON GRISWELL: How would you describe your connection to music?

PIERCE FREELON: For me, music, poetry, lyrics, and words are a part of my healing practice. Recently, I’ve had to turn to music to do a lot of healing around grief. My father’s transition really led me to my notebook, to my computer, and to my keyboard because I was hurting and was looking for a place to find joy, respite, and solace. To me, music has always been an expression of that process. It’s a sacred process and one that involves my ancestors and my family.

From left, the Mid Universal sandals in Black and Hurricane Verge sandals in Pine Needle.

RON: My connection to the outdoors is similar to the way you talk about music. Would you say that healing and capturing joy are also large inspirations for the music that you create?

PIERCE: The music is literally that expression of joy, so the process itself is healing, but also the product. Prior to innovations and modern technology around sound recording, those types of expressions existed in the moment, whether it was a wedding or a funeral or a birth… Human beings, but specifically Black folks, are musical. We dance, the arts are how we process transition, whether that transition is death or birth or coming of age. So I wouldn’t so much say that the healing is inspiration for the music that I make. The music itself is healing.

Hearing you talk about your relationship to nature—it reminds me of my dad. We would go on nature walks, he would sit me down on a log and say, “Now stop, listen.” And I’m a kid. What am I listening for? He’s like, “What do you hear?” I hear the breeze. I hear rushing water, I hear the birds. Just to sit and breathe—he was encouraging me at a young age to be perceptive. In this day and age, you’re always going, but that’s the opportunity for you to stop and be meditative. I find that in music, but I know other people are capable of finding other ways to tap into that source.

RON: In talking about those nature walks with your dad and being in those moments, how has that helped inform you and the things that you do now?

PIERCE: I still go to nature when I need to heal, but that’s actually the problem. If I have a bad day or a rough interaction or I’m in my feelings for something, and then I’ll go to nature because I need to slow down and get present. The thing that I’ve learned as I’m growing older is that like anything that you do to sustain the vessel—you don’t do it when you’re on the edge. We need to make it a daily practice. So that when the sh*t hits the fan, as it inevitably will in some capacity, your pitcher is so full that a little spill isn’t gonna rock you off your center. That’s the real lesson for me, is finding time for that daily practice of healing, not just when there’s a wound to treat, but when you’re doing alright.

PIERCE: It’s hard out here in this world, for anybody… It’s inevitable that there’s gonna be winter, you’re gonna get hungry, you’re gonna fall asleep, there’s gonna be struggles. The cycles are as predictable as the seasons and that’s the reason it’s important for us to be tapped into our healing. It’s [like having] a coat come winter time, you don’t wanna be out in these streets, in your Speedo in the winter. You just wanna be prepared for life.

Let me talk about our community as Black men. I don’t feel like we’re taught the types of tools that we need to embrace our vulnerability and tap into the healing that we need as brothers. The reasons for that are varied. It’s white supremacy. It’s toxic masculinity. We rob ourselves of access to a self-healing tool, but we can rediscover it in the quiet moments of the forest or on a kayaking trip. Why? Because a lot of folks are dealing with trauma. We don’t wanna be quiet because that silence will reveal something that we’re not equipped to deal with, and that is really sad… Brothers need therapy out in these streets and need vulnerability and quiet spaces, but we fill up that quiet with whatever, blunts, sex, or just ignoring it.

I feel it bubbling up, “No, can’t do that, ’cause that’s weakness.” Unfortunately, for folks who come up in certain communities, weakness could mean death for you. That’s not an exaggeration. That is not hyperbole. That literally could mean death for you. Poverty has you on edge in that way. It really robs you from the ease of breathing and peace of being. That’s why I think it’s important [to be tapped into our healing] because it’s harmful [when you don’t]. It leads to disease, it leads to social-emotional dysfunction, it leads to assault, it leads to self-harm and addiction, all types of negative things.

RON: Man… I was prepared for the interview, but not for the sermon — you preaching. (Laughs)

RON: No, seriously, man, we’re gonna have to pass a collection plate around for that… How has your creative expression assisted you on your healing journey and how can it help others?

PIERCE: We have that capacity within us to create something where nothing existed before. I can write a verse, write a song, a poem. It didn’t exist, and now it does. There’s something divine about that capacity to create that I think is… I would describe it as a divine feminine energy. My dad said, “It’s the most powerful force in the universe.” I think that’s what he’s talking about. Listen, as a cisgender and heterosexual Black men, I can tap into that divine feminine, too… It’s really the power of creation. Through that, anything is possible. You can change paradigms, change minds, change body chemistry. And you can change the world.

RON: From my interactions with you and your children, you’re someone I look at and I’m like, “Oh wow, this dude has a profound level of parenting and understanding his role as a father.” What are some of the things that have influenced you on your fatherhood journey?

PIERCE: I was really lucky. My dad was a great dad and I didn’t realize it at the time because he was just my dad. He was funny, clever, and very loving, stern when he needed to be. I really had a great blueprint and that came from his father. He had the best dad and he got that from his father. It is an inheritance.

You can inherit wealth in terms of property. You can also inherit wealth in terms of values. I hit the lottery with my dad. I’ve learned to take everything I’ve learned from him and to put my own spin on it with my kids. Even if you don’t have that type of relationship with your birth father, you can still inherit and learn the practice of fatherhood from uncles and mentors.

RON: That is beautiful, man. While we’re on the subject of your father, what’s one of the best lessons that you’ve learned from him?

PIERCE: I remember very early in my marriage, I was struggling with adjusting to this new relationship and family. I was stressed out and overwhelmed with work. The kids were young and I’m a new husband. Can I do this? I called my dad and we went to the Eno River in Durham. We walked for about 30 minutes, got off the trail, went deep in the shrubs, sat down, both of us in the dirt and did a breathing exercise together.

He asked me the same thing when I was a kid. I’m a grown ass version of myself next to my dad sitting in the dirt, listening, breathing, being receptive to the wisdom that’s already there within me. I already knew the answers, I was just so clouded by the fatigue of waking up early to take care of the kids, traveling, different time zones, jet lag. All that was clouding my ability to see the truth that was already there. To this day, although my dad’s physical presence is gone, when I wanna seek his counsel, I find it in nature. I can sit there and summon his presence. Really what he had to offer wasn’t anything external. He was giving me the tools to pull the things I needed from within and that’s what I think is so special about that lesson. The answers are within and we can tap into that wisdom and that ancient brilliance at any time.

The access to ancestral wisdom is in our DNA and is available to us at any time. Here’s the thing: some of our ancestors have been through some trauma. We’re going through some trauma. What you might find in those quiet spaces might need to be healed. Maybe through music, maybe through more walks, maybe through confronting your fears. It’s not just like, “I’m gonna be quiet and everything will be fine.” What’s required of you is to do that healing and get to a better place and to heal that ancestral trauma or that lived trauma. It will be visible to you only if you have the presence of mind to quiet the world around you and look inward. That is a mandatory prerequisite—that internal vulnerability—and that’s what my dad offered me.

RON: Man, you just poured so much into me. I’m going to pay it forward by pouring what you’ve given me into my family and friends. For real, for real. You’re a wealth of knowledge and wisdom. What kind of future do you envision?

PIERCE: Have you ever heard of how in Japan, they have this thing called forest bathing [the act of slowing down and becoming immersed in the natural environment]? It’s something a doctor can prescribe—that’s how deeply they understand the healing properties of forest bathing and we don’t.

To me, that’s the future: finding healing in our cuisine, in our daily practices, interaction with nature, how we interact with each other, and meditation or some other kind of mindfulness practice or even a spiritual practice—anything that further services our capacity for reflection, for peace. That’s gonna be my future and I’ll certainly impart that to my kids. I’ll put that in my music and when I put the songs out into the universe, hopefully, it will have that effect on the people that interact with it. That’s the future I wanna create.