Loving Day: Why June 12 Matters So Much to My Family 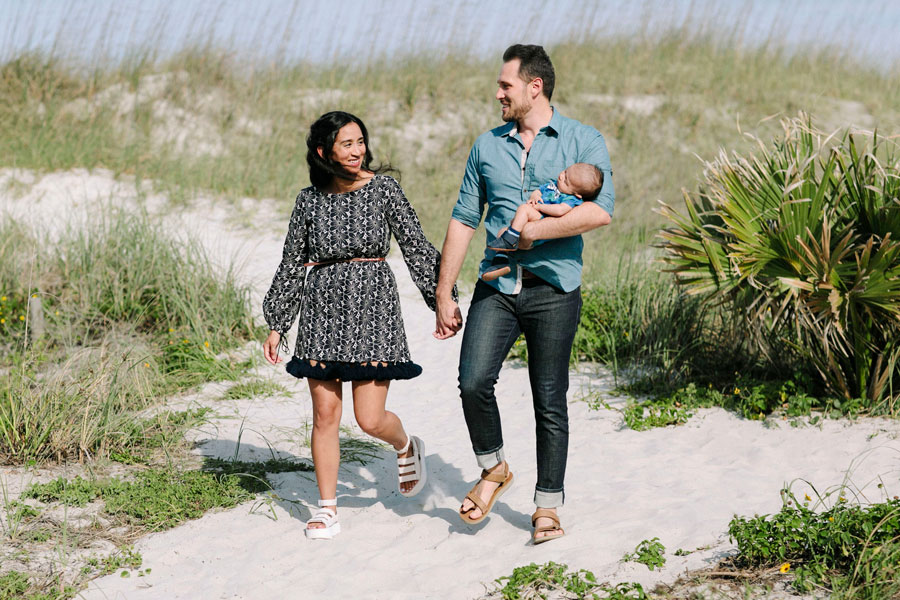 Growing up in a multiracial family, Samantha Wilson shares how her love story was made possible because of Loving Day. Words by Samantha Wilson. Photos by Kelly Martucci.

My husband and I bonded deeply on our first date, connecting over a love of food, family, and travel. In under a year we were married. Our story would have been impossible a mere 54 years ago.

Loving Day marks the anniversary of a step toward racial equality in the United States. The day is named after Richard Loving, a white construction worker and his wife, Mildred (maiden name Jeter), a woman of mixed Black and Indigenous ancestry. In June 1958, the two were married in Washington, D.C. where interracial marriage was legal. Weeks after they exchanged vows, the couple was arrested at their home in Virginia and indicted for violating Virginia’s law which deemed interracial marriage a felony. They were forced to leave their home state and years later, challenged the ruling all the way to the U.S. Supreme Court.

Both of my parents are multiracial. My mother, Rocky, was born in Mandeville, Jamaica. Her mother was British and Scottish and her father was West Indian. My father, Fred, was born in Tachikawa, Japan. His mother was Japanese and his father was African American. His parents met after World War II in Japan.

They met at work in 1980. Fred was a pilot and Rocky was a flight attendant. In 1980, diversity in airline crews was rare. My father was the only multiracial pilot in his whole company. Fred was trying to guess Rocky’s ethnicity, and that sparked their first conversation. They quickly found mutual ground in their shared identities as multiracial individuals, and became fast friends.

One of their first shared interests was reggae music. Rocky was impressed with Fred’s knowledge of the genre since it wasn’t very popular in the U.S. at the time. They began to go see live reggae bands together every Sunday. They also bonded over their love of food. He introduced her to sushi. In return, my mother cooked my father his first traditional Jamaican meal. Their shared appreciation for culinary exploration coupled with knowing what it’s like to live life as a mixed-race person sparked a life-long romance.

From left, Samantha’s paternal grandmother, Keiko, who was Japanese, paternal grandfather, John who was African American, and her father, Fred.

My parents and grandparents were lucky to avoid any potential legal issues due to their respective love stories. My paternal grandfather was in the military. On the army base in Japan, it was fairly common for soldiers to fall in love with locals.

My mother grew up in Jamaica and although interracial marriage wasn’t illegal, it was frowned upon. When her father was given an opportunity to move to Canada to expand his career, he was denied entry because interacial couples were not allowed to be married.

From left, Samantha’s maternal grandfather, Gladstone, who was West Indian and her maternal grandmother, Violet, who was of British and Scottish descent.

Even though the Loving v. Virginia decision was ruled on in 1967, my parents still faced a lot of adversity being married in the ‘80s. They were raising multiracial children in a predominantly white neighborhood. Neighbors questioned how they could afford to live in an upper middle class neighborhood. At least for us in the South, the law didn’t change people’s deeply-ingrained perspectives.

Far left, Samantha’s father who was one of the one of the first multiracial captains for a commercial airline.

My father faced a lot of challenges throughout his career as a pilot. Being one of the first multiracial captains, he made it a point to exceed expectations in his career. He instilled this mindset in all of us while raising his family. My parents knew that we would stand out in school, at work, and in our actions toward others. They always believed that we should be defined by our character, not the color of our skin.

One of the first qualities that attracted me to my husband Max was how comfortable he is in his own skin. Being multiracial in the South came with a lot of physical insecurities. Max taught me how to truly love myself and appreciate every bit of my individuality. I stopped obsessing over looking like everyone else around me and embracing my own unique characteristics, and finding pride in my own heritage. He made me feel safe in speaking out and standing up for what I believe in.

Being outdoors is the foundation of our home time together. When we first met, we got to know each other through walking on Jacksonville Beach with Max’s Shiba Inu, Pippin. During those walks, we discovered shared values and beliefs, such as the right to self-expression, fundamental equality for all, and the importance of experience prior to judgement. We each knew we had found our life partner after attending a few boisterous holiday gatherings at each other’s parent’s homes—it was as if we were always a part of the family. Over shared platters of Indian, Vietnamese, Thai, and Southern foods, our love of food, being outside, social justice, and a family-centric world cemented our connection.

Our fondest memories have come under bright blue skies. Whether we are enjoying Delaware Water Gap’s waterfalls, scaling summits in the Rocky Mountain National Forest, or biking along the Venice Beach boardwalk, living life outdoors allows us time to appreciate the beauty of nature, while putting everyday worries into perspective.

While Max comes from a predominantly white family, he has lived a lot of life for someone in their early 30’s. Florida is the 10th state he has lived in, with stops in Kansas, Iowa, Rhode Island, Colorado, Arizona, Missouri, New Mexico, New Jersey, and California along the way. From villages in the middle of nowhere, to NYC and LA, he has seen a little of everything. These wide-ranging experiences, combined with parents who pushed independence and self-discovery, gave him an appreciation for diversity and character.

“My mom raised my brother and I to understand the privilege we were born into, and the work others must put in just to have an equal opportunity. This understanding led to a great appreciation for those who overcame adversity to succeed,” says Max. The things he values most are ambition, individual expression, and self-discipline.

Prior to 1967, lawmakers thought they could prevent us from sharing our lives together. If we had the misfortune of being born at that time, I would be outraged. To have found the person—without question—that I wanted to spend the rest of my life with, but have no legal right to marry would be infuriating. Both of us dislike being told what we can do “just because,” so we probably would have moved to a state where it was allowed. Many couples wouldn’t have had the same freedom.

Samantha with her mother and her siblings on a vacation in the mountains of New Mexico.

Overturning laws banning interracial marriage—a ridiculous notion that skin color can determine whom you’re allowed to love—was a victory not only for romantics, but for the general freedoms of many U.S. citizens, whose lives were affected by similarly illogical restrictions labeled as “laws.” Because of the Loving v. Virginia decision, Max and I were able to wed when and where we wanted to, and have been able to focus on personal growth.

From left, Max wears the Original Universal Leather in Macchiato and Sam wears the Flatform Mevia in Jet Stream.

To get where we are societally has taken an extraordinary amount of work, and to get where we should be will take just as much or more. We feel a responsibility to educate our son on all the prejudices faced by those before him, and the importance of fighting for racial equality and freedom of self-expression.

We will raise our son to embrace his multicultural heritage with open arms. He will understand the ethnic history of each and every one of his ancestors and why it’s essential to demand equity for ALL. He will learn to “stand up for your rights” in all aspects of life, as so many did before him.